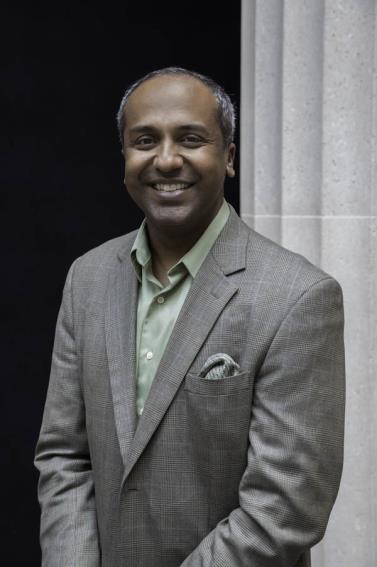 Sree Sreenivasan (@sree) is the first Chief Digital Officer at the Metropolitan Museum of Art, the latest step in what he calls "a three-decade, one-way love affair with one of the world's great museums." At the Met, he leads a world- class team of 70 working on topics he loves: digital, social, mobile, video, data, email apps and more.

In 2015, he was named to Fast Company's list of 100 Most Creative People in Business, in part for the work he and the museum are doing on the future of culture:  http://bit.ly/sreefc

He joined the Met after spending 20 years at Columbia University as a member of the faculty of the Columbia Journalism School and a year as the university's first Chief Digital Officer. He graduated from the Journalism School in 1993.

For four years, he taught an entrepreneurship class with Ken Lerer, co-founder and chairman of the Huffington Post and now head of Lerer Ventures. He has also taught media marketing classes at Columbia Business School. Because of his interest in startups, he has served as a mentor and adviser to dozens of new ventures, including many by his former students.

As Dean of Student Affairs, he supervised all aspects of the student experience for 400+ students from 40+ countries and 35+ states - from recruitment to placement and works on curriculum and planning in close partnership with Dean Nicholas Lemann and Academic Affairs Dean Bill Grueskin. The deans of Admissions, Student Services/Student Life and Career Services reported to him and he managed one of the school's largest teams and runs one of the largest budgets ($7.8 million, including $5.8 million in scholarship)s. Using new technology, he introduced several protocols for connecting with students, alumni, faculty and prospective students that have since been adopted in other parts of the university and elsewhere. He also has been involved in creating, building and marketing of new degree programs, including the MA in Specialized Journalism and the joint-degree in Computer Science and Journalism.

During 2009-11, he was part of the founding team of Digital News Associates - DNAinfo.com - a Manhattan news site with Joe Ricketts, Ameritrade founder (and owner of the Chicago Cubs and Wrigley Field). He was the lead consultant, business-plan writer and ideas guy, directly involved in all the initial hires (the team is now 45+ people). The site was named one of the  six hottest news startups of 2010 by BusinessInsider and was on New York Magazine's Approval Matrix - "Brilliant" & "Highbrow." It now has operations in all five NYC boroughs and Chicago.

He is cofounder of SAJA, the South Asian Journalists Association, a group of 1,000+ journalists of South

Asian origin across the US and Canada.